Click on any of the underlined blue links to be taken to the study that we used to draw these conclusions.

1  "Unfortunately, depending on the quality of the EVOO, it may have a lower heat tolerance than other oils. And with some high temperature cooking (such as for BBQ's or pan-searing meat and vegetables)... it can start to burn."

As this table of smoke points shows, quality of EVOO makes a big difference when it comes to smoke point. The better the EVOO, the higher the smoke point. Since this study the NAOOA sent us is sponsored by the Australian olive oil industry, I'm guessing they're testing the best EVOO available… which means it's going to perform at the upper edge of the spectrum.

The study also shows avocado oil doing "OK", but not as good as EVOO. However, we do not know the quality of the virgin avocado oil... but it probably is NOT a premium EVAO like we sell. And the fact it performs worse also indicates the importance of using a quality oil. And, our EVAO is loaded with the same protective antioxidants as EVOO too.

Finally, one thing is abundantly clear from this study... canola oil is horrible for you. It's one of the worst performers at high heat.

3 "Those researchers found that the oil in seven out of every ten bottles DIDN’T MATCH THE LABEL! Whether it’s refined, cut with other oils, or has a bunch of other stuff like food coloring in it, most EVOO is a fraud!" UC Davis Study

2 "When you start reading about what really goes on in the olive oil industry, it can feel kind of like you’re in the middle of a TV series on the mafia..." 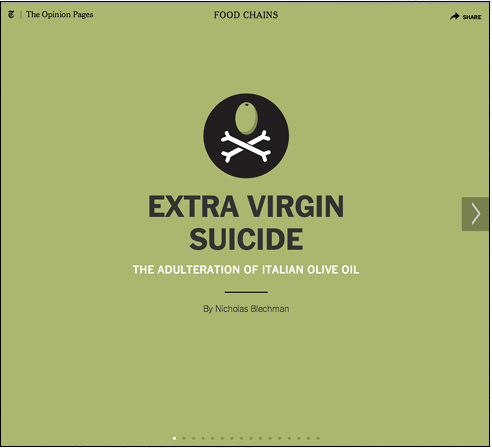 Click on the image to see the NY Times infographic.